skip to main | skip to sidebar

We're not blocking traffic: we are traffic!

Thanks to all who rode!

Surrey's first Critical Mass happened Saturday, March 24th (2007). We met at 3:30pm in the square under Central City tower, within view of the Surrey Central SkyTrain Station, and left at 4pm in a light drizzle. Do we want to do more rides? Let's talk. Send us an email at surreycriticalmass@gmail.com (and send us photos for posting too!)

In addition to the fifty-five cyclists, Robert Alstead (creator of the film "You Never Bike Alone") was out on the first Critical Mass ride in Surrey, and shot some video (on a little Canon Powershot ) and interviewed a few participants. The curious can find the short here.
Posted by Surrey Critical Mass at 4:38 PM No comments:

Photos from the ride!

Okay, it's been a few days but some photographs have come in, and here they are!


Here's a bunch of the fifty-five cyclists (from Surrey, North Delta, Langley, Richmond, and Vancouver) gathering under the awning at the gorgeous Central City tower in Whalley (a.k.a "Surrey Central") 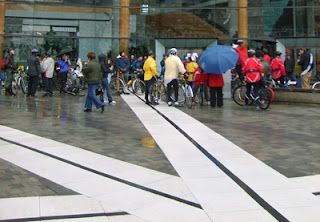 ... and here's the Mass of cyclists (which included acting-Mayor Bob Bose for the first portion of the ride) taking off down Fraser Highway. 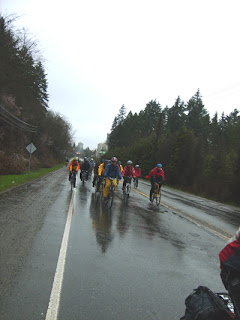 ... and here's the two cars and the dumptruck that stopped traffic coming the other way, by thinking they could reasonably and safely pass our mass of cyclists (illegally, by the way, over the double yellow line). It was a little tense, but we stopped them cold to halt their endangerement of the other cars on the road -- not to mention the cyclists and pedestrians! 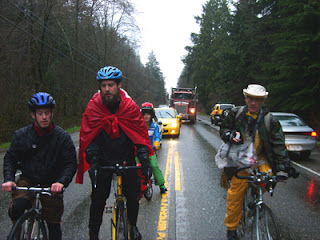 ... and finally we took a leisurely stroll down 152nd, and around the mall, before heading back to our meeting spot, all the way down 104th. 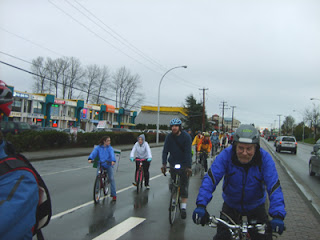 Posted by Surrey Critical Mass at 4:27 PM No comments:

What a great ride - and the weather even managed to give us a break!

Thanks to all who came out, stay tuned for a ride report and some (quickly snapped) photos of the ride.
Posted by Surrey Critical Mass at 10:31 AM No comments:

Hey! So the Surrey Leader printed a nice pre-ride announcement article... re-printed below. Cheers to them!

Cyclists are expected to gather at Surrey Central this weekend to celebrate the city’s cycling community.

The ride is part of a global movement called Critical Mass – bike rides involving large groups of people that are usually held on the last Friday of every month in cities around the world.

The goal of the rides is to demonstrate the advantages of travelling by bike and to point out the need for more facilities and safety measures for cyclists.

This will be the first Critical Mass ride in Surrey and it will take place March 24 at 3:30 p.m. in the public plaza near the Surrey Central SkyTrain Station.

Cyclists are encouraged to bring decorated bikes, costumes, noisemakers and flags. Critical Mass rides are usually self-organized, informal and free of leadership. Typically, only the date, time and meeting place are planned.

When biking on roads, riders may use a tactic called corking, where cyclists block traffic from side streets and proceed as a group, sometimes through red lights. It is thought to be safer to stick together and push through traffic in a large mass, than let cars drive through the pack.

The term Critical Mass was adopted from cyclist behaviour observed in some parts of urban China where people on bikes would wait at uncontrolled intersections and gather in a large group. Together, the “critical mass” could safely push through traffic.

The first Critical Mass ride was in San Francisco in 1992 with 48 riders.

Posted by Surrey Critical Mass at 10:01 AM No comments: 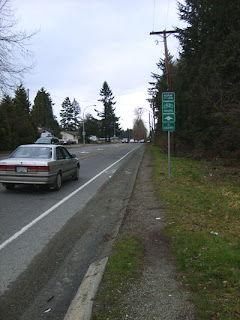 Here's a photo snapped a few weekends ago of the "bike lane" along 100th Ave, I believe near 140th Street, heading east out to Guildford that got blogged about a few posts back. It's not pretty.

You can barely see it, but there's a painted bicycle outline on the side of the road (near the front of the car). It's covered in grit.

There's also not too many cyclist-controlled traffic signals or "share the road" signs, or designated "off-corridor" bike routes (like 37th Ave, or 10th Ave. in Vancouver, for example)

Part of the problem though is the way the city is build. More and more scrub brush and forest and field are being torn up for warehouses, for single-family cul-de-sac "neighbourhoods" and there's no good walkable strips (think Main, Commercial, parts of Broadway, 4th Ave, Dunbar, Davie... the list goes on.) I don't know how or when that's going to change for Surrey; but it seems like they need to start cutting up the auto-centric mega-blocks and doing traffic calming to encourage people to get out and walk, and talk...and cycle. (This is a widely-held urban planning principle.) Right now, so much of Surrey is just so... impersonal.

Anyhow, email us if you've got your own Surrey-cycling story to share... or just a photo of either a working or a problematic "bike route."
Posted by Surrey Critical Mass at 11:30 AM No comments:

Well, it's not a totally big deal because it's not about him, but this week's Georgia Straight has an article about this ride and how Transportation Minister MLA Kevin Falcon (who mountain bikes and poses for Bike-To-Work-Week posters, but as far as I can tell, doesn't cycle-commute and hasn't admitted to as much) didn't hear about the ride until the Georgia Straight contacted him this past week.

Mr. Falcon was sent an e-mail on March 5th, an email that was also CC-ed to all the other Surrey MLAs, inviting him and his to the ride. Maybe his staff aren't doing their jobs by relaying information to him... but that's still a sorry excuse.

There are no organizers for Critical Mass. Never has been, never will be. The writer of the article, Matthew Burrows, has been on many a "Mass" ride in Vancouver and should know that.

Anyhow, there haven't been many updates to this blog. Life happens!

I hope more Surreyites have been directed to it thanks to the Georgia Straight article, as factually inaccurate as it might be.

I'm excited about the ride and excited that so many are coming out, hard-core, even with the high likelihood of rain. With luck, it could clear up for a nice hour or two window and get sunny right around 4pm. Could happen.

So yeah. Tomorrow. 3:30pm. Surrey Central Skytrain Station -- look for the cyclists gathering in the square across the street (under the big Central City tower). SkyTrain fare is $2.25 for those who are interested to know. I recommend bringing thermoses of hot coffee and tea!
Posted by Surrey Critical Mass at 10:25 AM No comments:

Who's got the time? 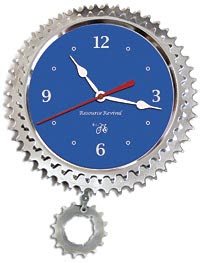 Yes, Daylight Saving Time goes into effect this weekend (moved up from the usual first week in April), but that's not the issue here...

Some of the early flyers and emails advertised the Surrey Critical Mass first ride as meeting at 1:30pm and leaving at 2pm on the 24th. Well, we found out soon after getting the word out that there is a Vancouver Area Cycling Coalition (VACC) meeting that afternoon from noon until 3pm, right across the street at the North Surrey Recreation Centre (10275 - 135 Street, meeting room #2).

We didn't want to compete with that (and we wanted interested VACC members to be able to join us) so we moved our meeting time to 3:30pm to give them enough time to gather themselves and their panniers.

So, yes, 3:30pm is the meeting time (not 1:30pm) and this is reflected in the updated posters and flyers.

Chainring clock image above from Resource Revival
Posted by Surrey Critical Mass at 6:14 PM No comments:

Surrey Critical Mass
If you'd like to get more info, get involved (yes please!), or if you'd simply like us to post a link to your bike shop, bike club, or bike ride, please email us: surreycriticalmass@gmail.com